The coin collection world is a fascinating space to be in. To the outside world, it’s a bunch of weirdos fangirling over coins, of all things. To some others, it’s a way to make some extra cash after someone breaks the news that you’re holding one of the rarest coins in the world.

To some invested coin collectors, it’s a world of historical significance where just one coin teleports you through time to when it was made, how it was made, and the hands and decades it passed through before you.

Whether you’re a fan of coin collecting or not, you’re probably here to have the above question answered. ‘How much is a 1966 Quarter Worth?’

Over the years, the quarter changed in design and composition which brings us to the 1966 quarter.

An ordinary 1966 quarter is made from a clad composition of copper and nickel. The U.S. mint produced over 800 million of them so they’re very common.

Since they’re not just common but are abundant in supply, there is not much demand for them.

Also, since they’re made from copper and nickel which don’t have much intrinsic value, 1966 quarters are not worth much more than their face value (25 cents).

The front side of the quarter shows a profile of George Washington facing left. You can see the word ‘Liberty’ placed directly above the profile and the minting date (1966) placed below.

You will also see the words ‘In God We Trust’ to the left of the profile, directly under the chin. 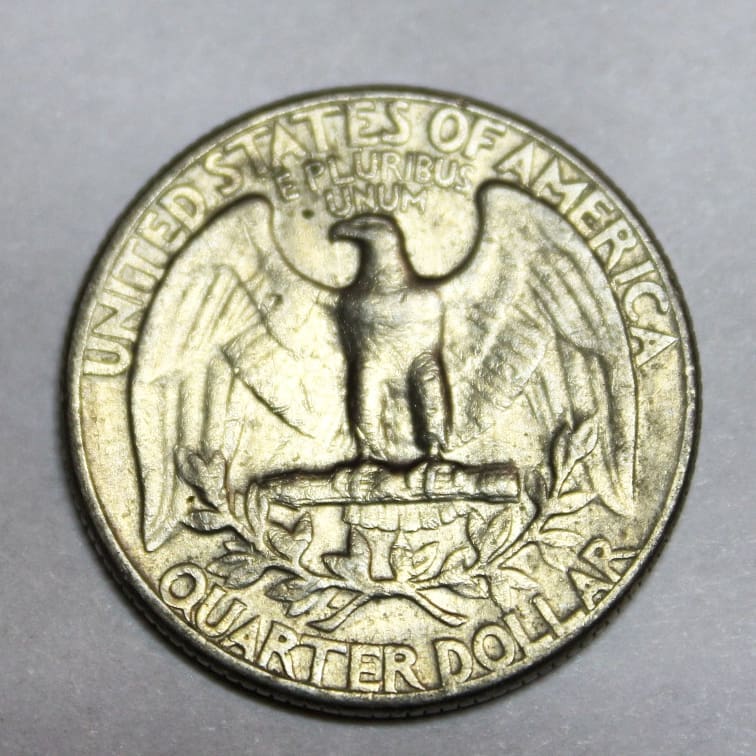 The back of the quarter shows an eagle stretching its wings while carrying arrows with a wreath below.

On this side of the coin, you’ll find ‘United States of America’ and ‘E Pluribus Unum’ right above the eagle. The words ‘Quarter Dollar’ are also placed below the eagle.

Up until 1964, Washington quarters consisted of 90% silver. After 1964, silver was removed, and replaced by a copper core with a coating of nickel.

After the introduction of the 1966 Quarter and the new copper-nickel composition, the coin received a lot of criticism because of the wear-down quality of the material used.

It is rumored that after then, some quarters were redesigned to include more silver rather than copper and nickel.

Other rumors claim that because of the drastic change in the composition of the quarters, errors in the operating procedure were unavoidable. Hence there are rumors of the existence of silver 1966 quarters, but no proof.

You never know if you’ll be the first to find the 1966 silver quarter, if it exists. So just in case it does, here are some ways to know if you’ve found one:

Analyze the error coin. When compared to copper and nickel coins, a silver quarter will be shinier and will not have any additional layers visible on the coin’s edge.

An ordinary eye test can be unreliable, so it is critical and safer to use a gram weighing scale.

Mintmarks are those small letters found on Washington quarters that tell where the coin was made. The absence of a mintmark can also indicate where the coin came from. If there is no mintmark on a United States coin, it was most likely produced at the Philadelphia Mint.

The Philadelphia Mint first struck the 1966-P Washington quarter, which had a legal face value of $0.25. This was known as a Mint Strike, and it allowed the coin to be used and accepted as a transaction for daily use.

Unfortunately, if your coin is missing a mint mark, it does not make it valuable, it just means it was probably produced at the Philadelphia Mint.

Just because the 1966 quarter is pretty common doesn’t mean there weren’t or aren’t a few valuable ones.

For instance, the most valuable 1966 quarter ever sold was graded MS68 by the Professional Coin Grading Service and brought a total of $11,750 during an auction held in 2019.

There are other 1966 quarters whose value exceeds their face value, but the factors that contribute to this are inconsistent and rare. Some of which are:

Keep in mind that the value of the coins is still subject to demand and supply. An ordinary quarter can be more valuable if many people want it than a rare error quarter that nobody wants.

Coins that have been certified by top coin grading companies are regarded as being in certified mint state (MS+) condition. Some ranges of mint condition 1966 quarters are:

Multiple stamp strike error occurs when the stamp strikes the planchet more than once. The most common error is a double stamp, but the coin can be struck more than three times.

Struck on a Cent Planchet Error

Again, this error occurs when the 1966 quarter is struck on the incorrect planchet – a dime planchet this time.

As with other planchet errors, because a quarter stamp is larger than a dime planchet, approximately 20%, if not more, of the quarter ends up missing. With inflation factored in, these were sold for an average of $500 in the past.

This error occurs when a 1966 quarter is struck on a nickel planchet. This error, like the above error, will have a part of the letters or numbers on the coin missing. It will, however, be the same color as a standard issue quarter. In the past, these were sold for an average of $550.

This error occurs when the stamp hits the edge of the coin and clips it. The coin then looks like it was cut roughly. These kinds of quarters can be sold for up to $300.

This error occurs when extra material is accidentally placed between the stamp and the planchet, and the item or material is stamped into the quarter, leaving behind a permanent mark.

So, how much is a 1966 quarter worth? In most cases, the answer is an underwhelming 25 cents. In some less frequent cases, maybe 25 dollars.

In extremely rare cases, they could be worth up to 900 dollars. However, those cases are few and far between. You’d have better luck with some other old coins.